Posted on September 22, 2016
On Monday 12th September, Barwells took part in a week long challenge for Barnardo’s. The firm chose to ride 120 miles on an exercise bike which is the distance from their Seaford office to Barnardo’s’ head office in London. Staff across the five offices signed up to do the challenge and raise money for Barnardo’s on their 150th anniversary.

The team decided to do their challenge outside the office to get more interest from the public which it definitely did create! Banners, balloons, and a poster were used to decorate the outside of the office and all staff wore a Barnardo’s vest. The Seaford office started the challenge off and managed to raise a brilliant £193 on the first day of cycling. It was hot weather throughout the week which meant cycling long distances became that little bit harder. Partner at the firm, Stephen Ash managed 12 miles and was first to ride the bike outside. Altogether, Seaford office clocked up 51 miles.

All offices made a great effort in supporting Barnardo’s who were cheering the firm on the whole way. Staff had a great time doing the challenge and posing for pictures feigning exhaustion or pretending to do work whilst on the bike.

Barwells hoped to have raised awareness of this fantastic charity over the week of the challenge and hope that client’s making their wills, leave something to Barnardo’s.

For pictures and a final update on how much Barwells raised for Barnardo’s, keep an eye on Barwells' twitter page:https://twitter.com/QSBarwells 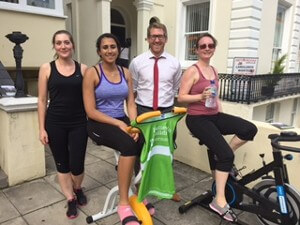 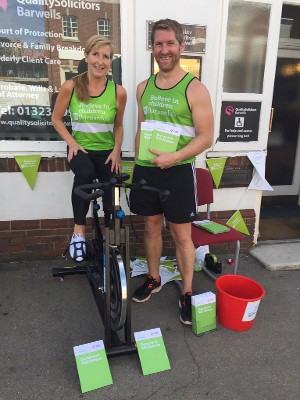 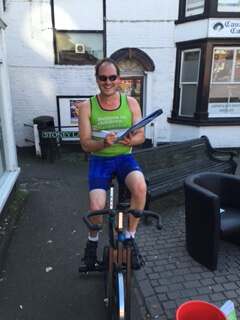