In celebration and the lead up to Easter, QualitySolicitors Chapman & Chubb are running a design your Easter Egg Competition for the local area. 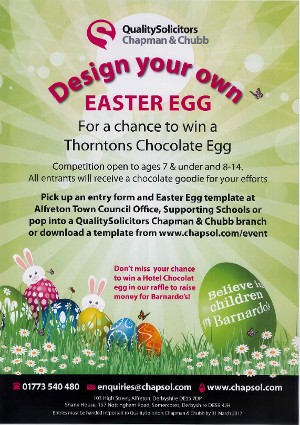 This is a great opportunity for children up to the age of 14 to showcase their creative design skills, for a chance to win a Thornton’s Easter Egg. The competition will be split into two age categories, 7 and under and ages 8-14. Do you know a talented child who could win?

QualitySolicitors Chapman & Chubb understands children will put a lot of time into their designs, and the firm has guaranteed all entrants will receive a chocolate goodie for their efforts.

The closing date for all entries is 31st March 2017 and they must be either handed in or posted to one of the branches to arrive no later than5pm on the 31st March. The winner will be announced after judging on the 3rd April before all schools break up for the Easter holidays.

QualitySolicitors Chapman & Chubb also has something for the adults – don’t miss the chance to win a Hotel Chocolat Easter egg in their raffle to raise money for Barnardo’s Children charity running at the same time.

For more information about the competition or the legal services available at QualitySolicitors Chapman & Chubb, please contact 01773 540 480 or email enquiries@chapsol.com