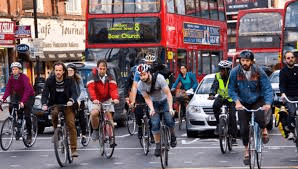 A cyclist who knocked down a woman crossing a busy London road says he faces bankruptcy from the resulting costs bill.

Pedestrian Gemma Brushett has been awarded £4,161 in damages by Central London's County Court after a judge ruled that she was equally to blame for the collision as cyclist Robert Hazeldean. Much of the argument in court focused on the fact that Brushett was looking at her phone while she crossed the street at London Bridge, while Hazeldean, who was travelling up to 15mph, was going through a green light and had sounded his horn to warn the pedestrian.

Hazeldean has spoken out about the toll the four-year matter has taken on his mental health, as well as his concerns about the precedent it may set for other cyclists. He says that covering the costs and compensation will personally cost him £20,000 and will leave him bankrupt.

Urging others to take out insurance through British Cycling, he added: ‘I can only hope that the focus on this case highlights the vulnerability of cyclists, both physically and against the courts, and that it might help reform a legal system that appears to leave certain road users disproportionately exposed.’

The cyclist has won widespread sympathy among the cycling community, a spokesperson said: ‘I feel very sorry for this fellow. I haven’t met anyone who thinks he could have done more to avoid hitting the pedestrian’.

This case also highlights the fact that the cyclist might well have fared better in court had he taken prompt legal advice and pursued a counterclaim against the pedestrian.

If you are contemplating court proceedings, or facing court action, then prompt and effective legal advice is essential

Telephone 02392 296296 or visit us on www.qualitysolicitors.com/largeandgibson