Posted on April 24, 2018
Congratulations to our Paralegal - Charlotte Bell who has been awarded the Herbert Willison Prize by the Birmingham Law Society.

Charlotte was nominated for the award by the student lead of the Graduate Diploma in Law (GDL) at The University of Law. The prize was awarded to Charlotte for achieving the most outstanding result, a distinction, in her Criminal Law exam in the GDL. The award is part of the Birmingham Law Society's Annual Awards to students who have completed the GDL in 2017.

Charlotte was presented her award at the Birmingham Law Society's Annual General Meeting on the 24th April and starts her formal training to become a qualified solicitor with Moore & Tibbits in September 2018. 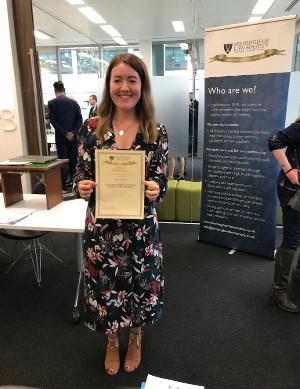 A huge CONGRATULATIONS to Charlotte from all at Moore and Tibbits.