Posted on October 13, 2017 by Frances Woods
I'm wearing the vest at the Birmingham half marathon to help raise awareness of bowel cancer. 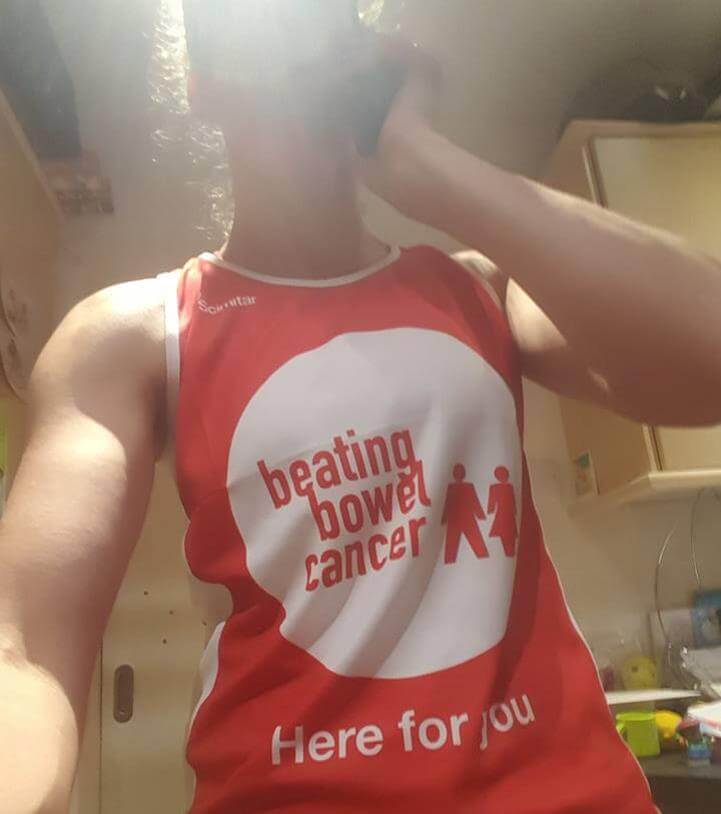 I signed up to Birmingham Half Marathon having run the Worcester Half in May without any training.  I didn't run Worcester for anyone but me.  I wanted to get in under 2 hours and was 30 seconds or so outside my goal.  I am hoping to beat that time in Birmingham and, as there are likely to be more crowds, I wanted to use it as an opportunity to raise awareness for a charity that has helped out a very special member of my family who, she says, without their support, she may very easily have given in to the challenges that she faced during the year she turned 50.

Sue received her diagnosis and treatment all within the space of 18 months and is now in remission, but it was a tough year for her, and those closest to her.  Thankfully, her nurse, Bernice, helped her and her husband Pete, through their darkest hours of the gruelling battle that 2016 and the early part of 2017 held.   I know there were times where it seemed impossible, but Sue kept a determined and brave face on for the best part of her treatment and is an inspiration to me, and many others, for the courage and strength she has shown throughout.

There are also friends of mine of differing ages who have loved ones who have fought and lost or are fighting following a path of treatment that has not lead to the same result : Sue was 49 when she was diagnosed.  One other I know of was 65 and another only 35.  Younger than I am now.  Cancer does not discriminate.

Whatever form it takes, cancer is devastating on all those affected by it: the patient, the parents, the children, the other halves and all their wider community of friends and family too.

Beating Bowel Cancer provide advice on both how best to live a life to help prevent bowel cancer (although there can be on guarantees) and, perhaps more importantly, how to spot the symptoms.  Early diagnosis really does help with successful treatment and therefore saves lives.  Their nurses provide invaluable support throughout the whole journey and their forum helps the sharing of stories between fellow patients and relatives who understand the journey from their own experiences and so provide the best empathy and support available to others on the same or similar journey.

Awareness of the symptoms are key but funds are also needed to help this charity to keep doing the amazing job it does.

I do have sponsor forms too but donating through JustGiving is simple, fast and totally secure. Your details are safe with JustGiving - they'll never sell them on or send unwanted emails. Once you donate, they'll send your money directly to the charity. So it's the most efficient way to donate - saving time and cutting costs for the charity.

I am pleased to say that I ran the half marathon in 2:05:26 and have raised £342 so far. Before and After with our medals