A pioneering scheme developed by the UK’s leading network of legal firms QualitySolicitors and children’s charity Barnardo’s has been shortlisted for a national award. 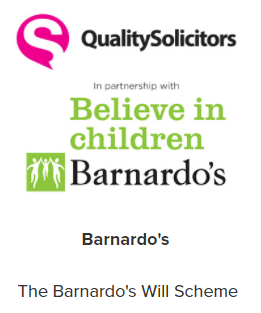 The Barnardo’s Will Scheme has been shortlisted for the Best Legacy or In-Memoriam Campaign at the voluntary sector’s flagship ceremony, the Institute of Fundraising National Awards.

The shortlisted campaign gives participants the opportunity to include a legacy in their Wills to Barnardo’s at no cost to them, via a local solicitor from QualitySolicitors.

2016 was the scheme’s most successful year with 892 Wills written across the UK. Since the partnership began in 2010, an estimated £14 million has been pledged in future legacy income. An impressive 72% of all participants in the Will scheme have included a gift to Barnardo’s in their Will.

Now in its 27th year, the National Fundraising Awards recognises and rewards fundraising excellence and best practice in the voluntary sector. The Barnardo’s Will Scheme has been shortlisted in the category ‘campaign that demonstrates innovation linked to success in the use of legacy or in-memoriam fundraising’.

Sam Monaghan, Barnardo’s Corporate Director of Children’s Services, said: “The success of the Barnardo’s Will Scheme will make a huge difference to the lives of the thousands of vulnerable children that we work with every year. By making a commitment to Barnardo’s in their Wills, people are helping us to transform the lives of some of society’s most disadvantaged children, such as those who have suffered sexual abuse and those who are leaving care. On behalf of all the children and families we support, we’d like to say a huge thank you to QualitySolicitors for their continued support and fundraising throughout our partnership.”

David Pope, Marketing Director at QualitySolicitors, added: “We are continually inspired by the commitment of the Barnardo’s team and are extremely proud of our partnership. It’s heart-warming to see the difference Barnardo’s makes to vulnerable young people’s lives and it’s our pleasure to work so closely with the whole team”.

The winners will be announced at a ceremony at the Brewery in London on the 3rd of July, the first day of the Institute of Fundraising’s annual Convention