Help Transform a Vulnerable Child’s Life this March Will Month

This March, Barnardo’s are encouraging those aged 55 and over to consider leaving a gift in their Will and to take advantage of having a professionally drafted Will by QualitySolicitors at no cost. Barnardo’s depends on legacy gifts for up to half of their voluntary income, which goes directly towards funding vital support services for vulnerable children and young people.

Last year around 301,000 children, young people, parents and carers were supported by Barnardo’s through more than 1,000 services across the UK, including young carers, care leavers, foster carers and adoptive parents, and those needing support with training and skills or parenting classes.

The scale of what Barnardo’s does may be big and complex, but their aim is simple – to provide the best outcome for every child, no matter who they are or what they have been through. Their plan is to build stronger families, safer childhoods and positive futures, and within that to focus on specific areas where Barnardo’s is uniquely placed to make the biggest impact: children in and leaving care, childhood sexual exploitation and mental health. 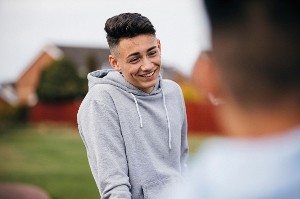 Andrew moved in to live at the address, with the older woman and Barnardo’s became involved in supporting both Andrew and his mum. Andrew’s Barnardo’s worker helped him to explore the nature of the relationship he had with the 34-year-old woman. Through this support, Andrew gained an understanding of grooming, manipulation, coercive control, and child sexual exploitation, and gradually realised he was being controlled and manipulated by the woman.

Andrew went on to disclose a ‘sexual relationship’ with the woman, stating that this started once he had turned 16. Barnardo’s shared this information with police and social work. However, as Andrew disclosed that the relationship started once he had turned 16, there was again no further action. This outcome impacted on Andrew’s mental wellbeing; he broke down and required psychiatric care.

Through the support he received from Barnardo’s, Andrew now understands that what happened to him was sexual abuse. Andrew is back in education and employment and working to build his future.

*Andrew's story is part of the 2019 Barnardo's Impact Report

QualitySolicitors has been Barnardo’s exclusive Gift in Will provider since 2010. Over our ten-year partnership, we’ve seen more than 3,500 people pledge £16.8 million to Barnardo’s through legacy donations, which is huge!

A gift in your Will can help Barnardo’s be there for the UK’s most vulnerable children and young people. This March, our exclusive partnership means we’ll write your Will for free, so to pledge a legacy gift to Barnardo’s this March Will Month, find a participating QualitySolicitors firm by calling 08082747557 or you can search online here.